IRVINE, Calif. (June 29, 2017) – Mazda North American Operations (MNAO) today announced the launch of the Driver’s Choice Event campaign. The new advertising spot, debuting on July 1, 2017, will feature luxury vehicle owners who unknowingly choose a Mazda vehicle over premium brands after a blind test drive. The premise of the campaign is to go beyond the traditional surprise-and-delight car commercials to highlight that Mazda can compete with luxury brands on design, features and driving exhilaration.

In advance of the blind test, premium vehicle owners were asked to participate in a blind study for luxury vehicles. Each vehicle was disguised in camo-wrap and foam pads to hide any recognizable bodylines or brand badges. The participants were then asked to give their honest feedback after test driving the vehicles and evaluating their features. After unveiling each vehicles’ brand badge, five of the six participants were pleasantly surprised to discover that they preferred the Mazda over the other comparable brands. The blind study was filmed in order to capture the honest opinions of the participants. 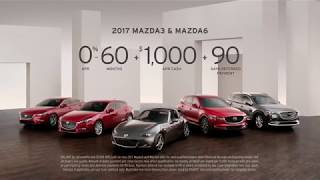 “This was a risky, but fun way for us to gain insight into what our customers experience when they visit a dealership,” said Russell Wager, vice president of marketing for MNAO. “By removing any preconceived notions about the vehicles, we were able to prove that Mazda vehicles offer similar, if not better, premium amenities and craftsmanship that are typically reserved for luxury brands.”

The goal for Mazda was to choose people for the study who not only drive premium brands, but those who are also considered “premium experts” because of their professions. As a result, professionals including an architect, designer, and engineer were chosen for this blind test because of their ability to professionally speak to Mazda’s superior design, craftsmanship and engineering.

The Driver’s Choice advertising spot will run across major television stations including ABC and NBC, cable and sports stations and on digital media platforms through September 4, 2017. The campaign and creative were developed in collaboration with Mazda’s fully integrated and dedicated WPP team agency, Garage Team Mazda.

Mazda North American Operations is headquartered in Irvine, California, and oversees the sales, marketing, parts and customer service support of Mazda vehicles in the United States and Mexico through nearly 600 dealers. Operations in Mexico are managed by Mazda Motor de Mexico in Mexico City. For more information on Mazda vehicles, including photography and B-roll, please visit the online Mazda media center at InsideMazda.MazdaUSA.com/Newsroom.