The difference between all-wheel drive, front-wheel drive and four-wheel drive seems more confusing than it actually is.

Most modern cars are front-wheel drive, putting power to the wheels that are also steering the car. The same reasoning is applied to all-wheel-drive-equipped vehicles where power is distributed to all four wheels. Unlike FWD and RWD, there have been many different applications of all-wheel-drive designs implemented in vehicles. The purpose of an all-wheel-drive system is to improve traction in slippery conditions, such as rain or snow, and provide the functionality and economy of a front-wheel drive system. Below is a quick primer on the difference between AWD and 4WD.

Four-wheel drive (4WD), like those found in many off-road vehicles, use a transfer case that is separate from the vehicle’s transmission. The driver engages the transfer case with a lever or a button. In contrast, AWD systems are always engaged and typically do not have an on and off switch.

Among AWD systems, there are some that simply divert some torque to the rear wheels through mechanical differentials while others use sensors to detect wheel spin and then engage electronic clutches. These electronic AWD systems are common in modern cars because full-time mechanical systems introduce drag that reduces fuel economy and performance. Some mechanical differentials cannot effectively distribute torque if one or more wheels completely lose traction.

The drawback with most electronic AWD systems is that they are reactive. Until a wheel begins to spin free, relative wheel speed sensors cannot detect a problem and engage the system. Then, the vehicle has to react to the problem and apply a brake or clutch to transfer power to the remaining wheels. What has been needed is an AWD system that is truly predictive – one that measures more than just wheel speed and engine power to decide where to apply torque. That’s what Mazda engineers did when they developed the i-ACTIV AWD system. By monitoring 27 different sensors over 200 times per second, i-ACTIV AWD considers not only wheel speed and engine dynamics, but g-forces, driver inputs to the braking and steering systems, outside temperature and even windshield wiper activity.

By constantly monitoring different factors around the vehicle, i-ACTIV AWD is able to predict upcoming conditions, allocating engine torque to the necessary wheel to maintain control, stability and forward momentum.

So rather than the common phrase of moving power “from the wheels that slip to the wheels that grip,” the beauty of i-ACTIV AWD is that it’s rare for drivers to feel slipping because the system has already sorted out road conditions and adjusted before the human body can ever detect anything ever going amiss. This further aligns with Jinba Ittai–a sense of oneness with the vehicle. Sure, there’s no drama involved to make the driver say, “Ah ha! It’s working!”

Then again, isn’t a little less drama in your life a good thing? 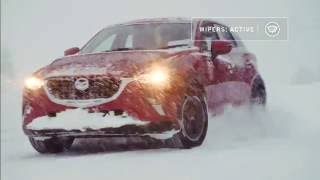