The 25 hours of Thunderhill is among the toughest races in the world. Temperatures can dip into the 20s overnight, and it frequently rains. Yet each year, a team from Mazda shows up to race. By itself, that’s not unusual. Many automakers field racing teams, but it’s who Mazda sends to represent the brand that makes the difference. 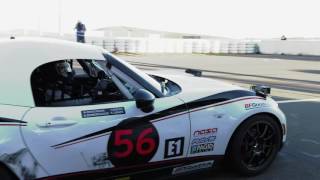 The 25 hours of Thunderhill is among the toughest races in the world. Temperatures can dip into the 20s overnight, and it frequently rains. Yet each year, a team from Mazda shows up to race. By itself, that’s not unusual. Many automakers field racing teams, but it’s who Mazda sends to represent the

“One of the things that makes Mazda unique is that we have a lot of racers in the company and among our dealers,” said Robert Davis, senior vice president of special assignments, Mazda North American Operations. “Endurance racing really pulls the group together, and it’s a great way for us to improve our relationships.”

For the last four years, the Mazda team has brought several Global MX-5 Cup cars to Thunderhill, with driving teams made up of Mazda dealers and employees, plus a few of Mazda’s pro racers to serve as driving coaches. The pit crew is also made up of Mazda employees who come along to experience the event.

“Our chief information officer took responsibility for all the timing and data computers,” recalled Mazda Motorsports director, John Doonan, “and the head of our ad agency was one of the people putting fuel into the cars.”

Thunderhill is an adventure like no other, but the day-long competition is much more than a bonding exercise. Preparing the racecars by hand and then racing them helps Mazda improve the cars they offer for sale to the public.

“On weekends we’ll have shop time and we’ll prep the cars,” Doonan explained. “It’s a team effort, all internally done. That’s what impresses the dealers so much – that we literally work on these cars ourselves so we can go racing.”

Having prepared the cars personally, the team is tuned in to what happens during the race.

“Anything we do with racecars, we try to capture learning that can be applied to the production assembly line,” Doonan said. “For example, we developed a motorsports gear set that is now standard on the MX-5.”

The 25 Hours of Thunderhill doesn’t end when the checkered flag flies. The trust and understanding that has been forged at the track translates directly into better customer service in the showroom.

“Racing prepares the dealers and the people at the dealership to have a better explanation of the car, and of what Mazda’s all about,” Davis said. “It also helps dealers explain the connection between our motorsports activity and the street car. For example, the transmission is different today in every MX-5 because of that race. It’s a direct connection.”

Jeremy Barnes is Mazda’s director of public relations & brand experience, and he agrees. “By bringing those dealers into our motorsports family, they see who we are and they can take that story home to their customers,” he explained. “We don’t just want to sell a car, we want to sell the experience of being a Mazda owner, of being part of our family.”

For the Love of the Sport

By this point, you may have noticed that the emphasis is not necessarily on winning the race, although the Mazda team has historically performed very well. For a brand that’s used to standing in the winner’s circle, it’s the deeper aspects of this race that matter most.

“The part I love is when we’re faced with adversity,” Davis insisted. “This year, one of our cars came in after being hit really hard, and we thought it might be totaled. But a couple of the guys looked at it and said ‘we can fix this.’ They got it up on jacks and they fixed it in 35 or 40 minutes. That car actually went on to turn the fastest lap of the race. It’s that camaraderie and spirit that makes me proud of Mazda and proud of the people who associate with us.”

“For me it comes down to two words: shared passion,” Doonan said. “Especially when we bring new dealers into the mix. You can see it in their eyes. It’s passion not just for racing, but for cars, for driving and for our brand.”