The road to becoming a race car driver was a long and difficult one for Marine Staff Sgt. (Ret.) Liam Dwyer. It included a tour of duty in the Middle East which resulted in serious head injuries. Undaunted, he volunteered for a second tour in 2011, where he stepped on an explosive while on patrol. The blast tore off his left leg at the knee and gravely injured his torso and remaining limbs. Only the heroism of fellow soldiers and a furious fire fight to get a medical helicopter to his aid saved Dwyer’s life.

Dwyer underwent roughly 50 surgeries to repair his grisly wounds, and in the process of his long recovery, he met John Doonan, director of motorsports for Mazda North American Operations. Dwyer’s great love was driving cars, and Doonan promised a test session in one of Mazda’s MX-5 race cars when Dwyer was well enough. The test went smoothly, and only three years after his Alive Day, Dwyer became a Mazda-backed race car driver using a special prosthetic to operate the clutch pedal. He is now a multi-race winner in the IMSA Continental Tire SportsCar Challenge series, and one of the most popular personalities in the sport.

But Dwyer faces new challenges. This week at the Walter Reed Army Medical Hospital, the 36-year-old native of Litchfield, CT underwent a 12-hour surgery to make repairs to his right leg. The procedures were conducted to increase mobility and lessen the chronic pain in his leg. Once he’s healed (approximately three months), Dwyer is slated to be among the first to receive a radical new procedure to embed a post into his left femur, which will allow a healthier and more sturdy connection for his prosthesis.

The pair of surgeries are daunting, but Dwyer draws strength from his relationship with those at Mazda. 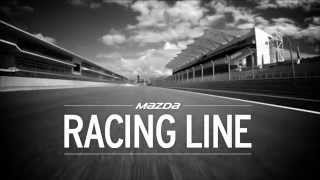 The road to becoming a race car driver was a long and difficult one for Marine Staff Sgt. (Ret.) Liam Dwyer. It included a tour of duty in the Middle East which resulted in serious head injuries. Undaunted, he volunteered for a second tour in 2011, where he stepped on an explosive while on patrol. T

“The support I get from the people at Mazda… it’s huge because it gives me something to look forward to, something to plan on,” he explained. “When I was going through my surgeries before, it was really a struggle of ‘What am I gonna do the rest of my life? Am I gonna be able to hold a job? How am I gonna pay for a house? Can I even drive a car?’ That was going through my mind.”

After a multi-year recovery at Walter Reed, he was burdened with these doubts that must be at the forefront of concerns for many injured veterans before they return to civilian life.

“I was thinking ‘What am I gonna do?’,” Dwyer said. “And then racing cars with Mazda fell into my lap. That was a dream job that I always wanted. It’s now here for me to do. That’s probably my biggest worry with this is not being able to race cars anymore… because it means so much to me.”