Mazda believes that a great driving car can also be beautifully designed. This philosophy is an integral part of every vehicle that Mazda builds, and Mazda recently unveiled a new car at the Los Angeles Auto Show that is the fastest embodiment of its sophisticated and purposeful design approach.

Many modern race cars are ugly beasts: designed purely inside of a computer without any aesthetic cues or relationship to the passenger vehicles of the given make. Mazda aimed to be different: to make the new race car fast and beautiful.

The new Mazda RT24-P prototype race car – is not only a 200-mph rocket on wheels, but is also instantly recognizable as a Mazda because of KODO—Soul of Motion design. KODO Design represents the instant that energy becomes motion, such as the muscular beauty as an animal pounces or a human leaps into action. Its’ flowing lines and angles – such as the five-point grille – means the new race car is as beautiful as it is fast.

The Mazda RT24-P – named for Mazda’s “Road to 24” young driver development program – is powered by the Mazda MZ-2.0T, a 600-horsepower 2.0-liter, inline four-cylinder turbocharged engine that will open the 2017 season at the end of January with the 54th-annual Rolex 24 Hours at Daytona.

A massive effort was undertaken to assure it looked and performed like every other Mazda in the current lineup.  Mazda designers in California and Japan worked in concert with Riley Technologies, who designed the Riley Mk. 30 chassis, and Multimatic, who were in charge of the aerodynamics, to create a machine that carries many recognizable attributes onto the race track. 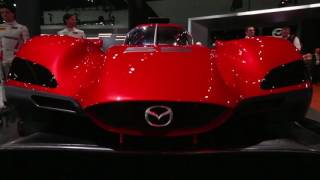 Mazda believes that a great driving car can also be beautifully designed. This philosophy is an integral part of every vehicle that Mazda builds, and Mazda recently unveiled a new car at the Los Angeles Auto Show that is the fastest embodiment of its sophisticated and purposeful design approach. Man

“KODO Design is at the heart of any vehicle that carries a Mazda badge, and that is very evident in the design of the 2017 Prototype,” said Ken Saward, senior manager of design at Mazda’s Research and Development Center

The Mazda Prototype will race in North America in the IMSA WeatherTech SportsCar Championship, the highest level of endurance road racing on the continent.

“We considered the two main parameters of designing a successful race car for this series,” Saward added. “Aerodynamic performance and the new-for-2017 technical regulations. Working with Multimatic’s aerodynamicist and engineers, we discovered that applying the KODO design philosophy to the surfaces and the silhouette of the car enabled us to create a dynamic, purposeful-looking design and a very aerodynamically efficient one.”