The People Behind the MX-5 series features interviews with engineers and designers involved in the development of the fourth-generation model. The first episode in this new series focusing on the MX-5 RF hardtop model introduces Masanori Minamisawa, who led the exterior design team. Read on to find out about the challenges Minamisawa faced as he sought to design the car of his dreams.

Masanori Minamisawa, exterior designer of the MX-5, is well-known at Mazda for his musical endeavors. He plays a Fender Stratocaster and says that through this guitar he has discovered “oneness with music.”

“The first time I held it, I was impressed by the way its shape conformed to the human body, its functional layout that lets you play exactly the way you imagine, its expressive tone, and its distinctive, timeless design,” says Minamisawa. “The value of musical instruments is in playing them. They’re not just objects to be admired for their beauty. The same thing applies to automobile design. When designing the MX-5, I kept one thing in mind: What kind of design will let the driver feel at one with the car?”

Minamisawa, who led the exterior design team under chief designer Masashi Nakayama, was inspired to become a car designer by something he read in a magazine around the time he graduated from high school.

“The article said something like ‘in order to make a surface more beautiful, it’s important to give it a slight roundness.’ I enjoyed drawing, so I decided to go into design. I felt it would stimulate my creativity,” he says. “I was also influenced by my big brother, who was a rotary engine fan. I felt Mazda was making real sports cars, so I came to work here. I’ve worked exclusively in exterior design and learned a lot over the years. Then I was put in charge of the Verisa (available only in Japan) and the third-generation MX-5. I was really happy when they asked me to lead the exterior design team for the new MX-5 because it was my first chance to be involved in the development of a sports car from the start.”

Minamisawa gave the soft-top a form that embodies the pleasing feeling he gets when playing his electric guitar softly. The shape of the car is such that just by sitting in it and looking around, you get a sense of oneness with the car. Once you start driving it, you get an exhilarating feeling as if you’re plunging headlong through the light that streams from the edge of the front fender. And the details work together to emphasize the feeling of perfect control. The beauty of the soft-top is both timeless and universal. And it’s fair to say that its combination of functionality and beauty is an example of design magic. But Minamisawa would get another chance to “perform.” And it was in designing the rigid hardtop that Minamisawa, who had never been interested in beauty for its own sake, had a chance to demonstrate his real ability.

A focus on design and functionality with the soft-top meant space was limited, and it was going to be difficult to house the rigid roof of the hardtop in the body. Various ways to divide the roof and stow it were considered in an effort to make the roof parts and the way they moved together beautiful.

Various ideas, some of them extremely complex, were studied using a 3-D computer model that made it possible to see how the roof would move. The images were very realistic, and the designers spent days gathered around the computer discussing the advantages and disadvantages of each proposal. Nakayama entrusted the computer design work to Masanori Ito, a digital modeling expert.

“Ito owns a first-generation MX-5, and he knows all about the feelings the car inspires,” Nakayama says. “He’s a very quiet guy and doesn’t go on and on about what he does, but his work is very important. He didn’t just create the image we had in mind on the screen. He put his skill as a digital modeler to use to give expression to the MX-5 and created several digital models that allowed us to check the roof’s movements.”

But space limitations made it next to impossible to stow the entire roof. Time went by, and Minamisawa still couldn’t come up with a design for the rigid hardtop that felt right. It was clear that fusing beauty with functionality would be no easy task.

“It was then that I sat down and asked myself what it was that we were trying to make,” Minamisawa says. “Was our goal with the hardtop the joy of a fully stowed roof? No. Our aim was to bring the pleasure of being at one with the car and the wind and the sky to a wider audience. So what was necessary to achieve that? That gave me an idea, and I realized that was what it was all about. After that I found the solution.” In June 2013 a meeting was held to consider how to proceed with the rigid hardtop. The engineers presented their findings, and made it clear that, with the retracting mechanism in place, there simply wasn’t room to stow the entire roof within the body of the soft-top.

Then Minamisawa showed a sketch he had drawn while they were talking. It showed a strikingly beautiful fastback MX-5 with a rear roof that curved down to blend with the rear fender. The room fell silent.

“While it was unquestionably an MX-5, with its retractable hardtop and fastback styling it offered new value through and unprecedented beauty,” says Minamisawa. “That sketch represented a revolutionary idea. It was only because I had thought long and hard about our original intentions that I was able to come up with it.”

The development team had spent months discussing how to reconcile the retractable hardtop with the design. At that moment it was clear to everyone in the room that that was the answer they had been searching for.

Working together to create the retractable fastback of our dreams: the MX-5 RF. The power of co-creation brings new value to the MX-5

Now all that remained was the struggle to find a way to make the solution they had settled on a reality. Minamisawa and the design engineers traded numerous proposals as they slowly but steadily advanced toward their goal. The beautiful MX-5 RF with a roof that opened and closed smoothly gradually began to take shape on the computer on Ito’s desk, proving that both the engineers’ requirements and the designer’s vision could be met. It was not unusual for the production engineers to be present as well. “The design and production engineers communicated with each other frequently. They really put a lot of energy into this project. Or perhaps it would be better to say they put a lot of heart into it,” Minamisawa says. “They worked hard to make the opening and closing mechanism as narrow as possible. It also had to be fitted on the production line. Little by little, their efforts enlarged the space between the rear roof and the rear fender, which was essential for the success of the design. It was my job to take this width of only a few millimeters and find the line that would embody the beauty of the MX-5.”

At each stage in the process Minamisawa would find the best line and then meet with the engineers again. They knew they were working to create the car of their dreams, but each meeting confirmed that they weren’t there yet. “Thinking about all the other people involved brought home how critical it was to find the perfect line.” The MX-5 RF made its debut at the 2016 New York International Auto Show in March. When its fastback-styled rear roof suddenly rose and the hardtop began to fold away, there was a roar from the audience and a burst of camera flashes. Clearly, no one had imagined that the rear roof, which blended beautifully with the rear fender, would detach from the body and rise.

Minamisawa was in Japan watching the event streamed live via the Internet. “When it went well, I was relieved and felt tears in my eyes. Fusing universal beauty with high functionality is not something a designer can do alone. Being able to achieve that as a team was a great joy for me as a vehicle designer.”

With his design of the MX-5 RF, Minamisawa sought a fusion of beauty and functionality. What kind of music does the car make? Drive it and see.

Check out this video showing how the roof the MX-5 RF opens and closes. 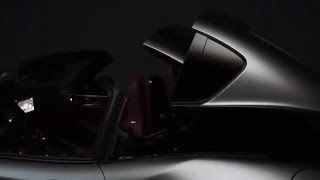 The People Behind MX-5: Masanori Minamisawa, Exterior Designer The People Behind the MX-5 series features interviews with engineers and designers involved in the development of the fourth-generation model. The first episode in this new series focusing on the MX-5 RF hardtop model introduces Masanori