You don’t know what true freedom feels like until you’re cruising down a road with the top of your Miata down, beard flowing in the wind. Just ask Lewis Snyder, a mechanical engineer who lives in Rochester, New York. He bought his first Miata in 2012 and immediately fell in love.

“I’ve had the same salesperson at Mazda since the first Miata,” Snyder said. “Judy Luksic at Mazda of West Ridge has become a true friend, every now and then I’ll stop in for a cup of coffee when I’m driving by and we’ll talk about cars, family, or life in general. It’s been a fun and enjoyable dealership experience; how many people can say that?”

“I love driving it,” Snyder said. “It’s organic, like an extension of yourself. You don’t have to think about it. The second I get in the car I have a smile on my face.” As a child, Snyder and his family vacationed often in the Adirondack mountains. He dreamed about driving the twisting mountain roads in his own sports car. After buying his first Miata, he, and his husband Dave, grabbed the opportunity to take the car for a spin through the Adirondacks when they were on the hunt for a good vacation spot.

“As soon as we entered the mountain range for the first time and the roads got a little more exciting, I knew the MX-5 was in its element,” Snyder said.

Driving his MX-5 Miata isn’t all about winding mountain roads, though. He once took his MX-5 for a spin at the Watkins Glen International track with the Midstate Miata Club of New York. The weekend the track opened, it held an event that brought thousands of people from all over the Rochester area—all automotive enthusiasts who came to share their love of their cars. 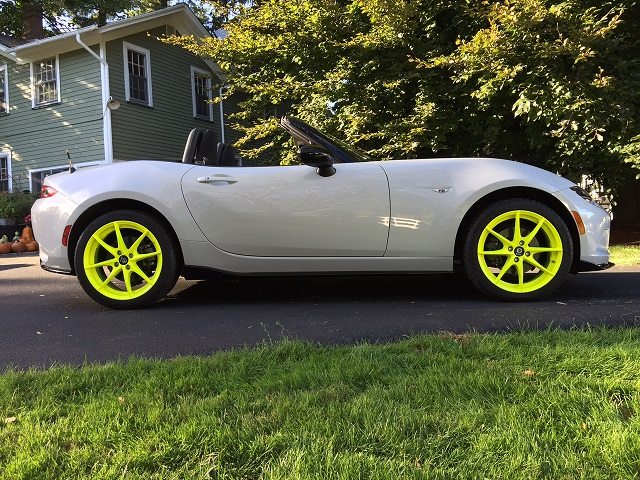 “The day was especially fun because every single person there loved their car and loved to drive,” Snyder said. “No matter if you were in a pickup, exotic car, or minivan, you were there to have fun in your car and hang out with people who had the same passion.”

Lewis drives his MX-5 Miata nearly all year long, with the exception for the snow-heavy winter months in upstate New when the snow can get too deep on the roads. But as soon as the snow dissipates, the Miata is back on the road for the rest of the year. “It’s all about the reliability,” Snyder said. “My Mazdas have never had any issues; they just keep on going.”

To keep up with Snyder’s MX-5 and beard, check out his Instagram: @bearded_miata