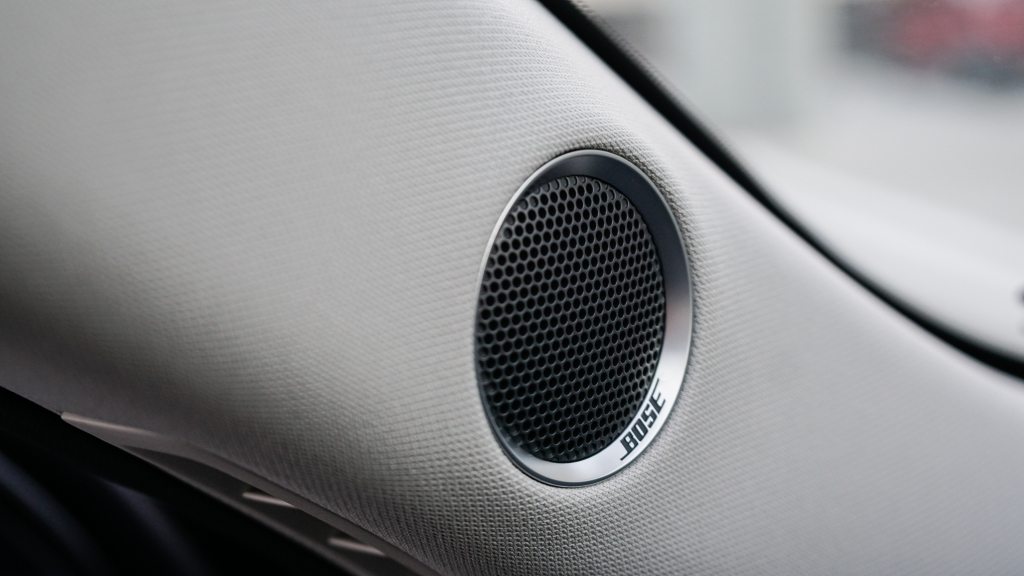 Mazda and BOSE® have never been obsessed with numbers. Instead, they focused on the overall experience.

Mazda doesn’t focus on horsepower, 0-60 times or audio system wattage. The automakers cares more about how the vehicle drives, how the system sounds and how the listening experience adds to the driving experience.

Starting with the Mazda CX-9 in 2016, Mazda considered how people listen to music in their vehicle and the music genres they listened to. The designers and engineers looked at the file formats and bitrates, and how they connected to the car for listening (Bluetooth audio and USB).

If they listened via Bluetooth, did they listen to music stored locally on their Bluetooth device, or were they streaming it from cloud-based subscription sources such as Pandora, Spotify, Apple Music, Google Play, Amazon Music, iHeartRadio, etc.? If they listened to music via USB was the source their smartphone music library, a USB flash drive or an iPod. Listening to music in the CX-5 with the BOSE® premium audio system delivers a class-above experience.

Starting with the CX-5’s quieter cabin, Mazda and BOSE® engineers obsessed over every little engineering detail of the CX-5’s premium sound system, from identifying the types of music and file formats customers prefer to the effect that seating materials would have on the audio experience, no details were overlooked to maximize the listening enjoyment.

“As we worked with Mazda to develop the sound system, we focused on three key elements: clarity, imaging and power,” said BOSE® system engineer Atsushi Hinokidani. “The system needs to deliver clean, undistorted sound to the listener’s ears. The sound image must be precise, regardless of the music source or format. And it should have powerful bass performance that the listener can truly feel.”

But before engineering could begin on the CX-5 sound system, Mazda and BOSE® engineers from the United States and Japan had to overcome language barriers.

“The adjectives we used had to be defined beforehand,” said Mazda HMI and infotainment engineer Matthew Valbuena. Typically, when we describe sound, we may use words such as tight, punchy, boomy or spirited. For the Mazda engineers in the U.S., those terms were well understood. But in Japan, that terminology may not have the same meaning so we had to develop a global dictionary of audio terms, so that everyone had the same understanding of what was meant.”

Engineers strategically placed five of the CX-5’s 10 BOSE® speakers ahead of the front seats for optimal sound imaging. The goal was to make the listeners feel like they’re in the front row of a concert, able to listen to every pulse or rhythm as an experience rather than a noise.

Engineers spent a significant amount of time fine-tuning the dynamics of the system utilizing music tracks that are considered the standards of sound quality, but added today’s pop, hip-hop and rock music.

Integral to the aural experience were BOSE® Centerpoint® 2, SurroundStage® and AudioPilot® 2 sound processing technologies. BOSE® Centerpoint® 2 technology transforms stereo music from HD Radio, digital music files and SiriusXM Satellite Radio into surround sound with greater precision and a wider sound field that engulfs you in the performance. BOSE® SurroundStage® technology gives all seats the same balanced 360-degree sound field. BOSE® AudioPilot® 2 noise compensation technology actively monitors the CX-5 cabin for constant noises, like rough roads, and dynamically adjusts your music to compensate using enhanced audio algorithms so you only hear the music and not the road. Tuning the complete BOSE® premium audio system involved long days and many laps around the Mazda Miyoshi Proving Ground in Hiroshima, Japan at speeds of 80 to 90 mph, listening to the audio system at all speeds to make sure it was perfect for any sort of adventure.

“There were probably a total of 15 people working on the vehicle in terms of listening and defining the audio working back and forth, so we would rotate in and out of the vehicles,” Valbuena added. “When we were doing the dynamic tuning on the Miyoshi Test Track in Japan, every seat was full. It was a crowded house. We would do multiple laps and certain people would rotate in and out to get all the engineers through the vehicle listening in every seat to make sure every passenger shared the experience.”

Collaborating with BOSE® resulted in the refined “Mazda Signature Sound,” which debuted with the CX-9 and is now part of every Mazda moving forward. The obsession with perfecting every detail from seat material, speaker placement, noise compensation and little touches by Mazda and BOSE® is what makes the CX-5 a crafted crossover SUV rather than just another appliance.

Tags: BOSE®, CX-5, Engineering, Mazda
← Supporting Those Serving Our Country at Home and Overseas this Holiday SeasonMeet the Man in Charge of Mazda’s Heritage Collection →