Any vehicle with that few of miles would ordinarily be relegated to a museum, a look-but-don’t-touch domicile of sterility. But Mazda doesn’t have a museum to store any of its 70-plus heritage vehicles; it has a working garage. And Mazda isn’t a “museum” kind of car company.

Driving really does matter, and Mazda let that be known loud and clear as the title partner of Touge California (pronounced “Tu-geh”), the only vintage car rally for Japanese makes in North America. More on that “loud and clear” part later. 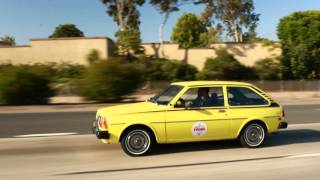 For Touge California, which was created by Japanese Nostalgic Car’s Ben Hsu and Patrick Strong, Mazda chose three vehicles from its heritage collection to participate:

Mazda brought three historic cars to San Diego, joining 25 other historic cars made by various automakers to partake on a 200-mile road rally. The rally wound through the canyons and coasts, challenging drivers and their companions on some of the most fun roads in the world. “Touge” literally means “mountain pass” and is a nod to the underground races staged in the hilly Japanese countryside.

This event wasn’t competitive, though, but it was steeped in occasional tribulation. Some vehicles stumbled in the mountains. Mazda’s 59-horsepower GLC worked its little 1.4-liter engine pretty vigorously but persevered on the challenging throughways. In the end, all of the participants met at Mazda’s R&D offices for the rally’s final checkpoint, where Mazda’s collection of heritage cars calls home. The day finished with revelry, stories shared of the 10-hour drive—oh, and barbecue. And it ended in something loud and clear, alright: Director of Public Relations Jeremy Barnes firing up Mazda’s RX-792P IMSA prototype race car in the high-walled courtyard where dinner was being served.

With a shrieking 750-horsepower, four-rotor engine booming echoes throughout the building, the RX-792P stood par excellence for aural delight. And, if nothing else, it was a solid wakeup call for anyone starting to suffer from a tri-tip or pulled pork food coma. The RX-792P was a bit of an odd duck in itself, using the same engine as the Le Mans-winning 787B race car for the U.S. IMSA series after it was outlawed internationally. It raced for one season in 1992 before Japan’s “bubble economy” effectively halted such motorsports activities in the early ‘90s.

But, because driving matters, it’s actively raced in historic races to this day—a mandate from corporate executives who also believe heritage should be celebrated at 10,000 rpm of wide-open throttle down Mazda Raceway Laguna Seca’s front straightaway. And it looks like nothing that came before or has come since.

After the rotary serenade, more than 70 guests were treated to a private tour of Mazda’s heritage collection in the building’s basement, which is closed to the public. It didn’t matter if guests came by way of a vintage Mazda, Toyota, Honda, Nissan, Subaru or Mitsubishi. Everyone was there because they took pride in preserving the past and appreciated the impact Japanese cars have had both in the native country and in the U.S. They drove their cars, keeping them where they should be—on the road—and smiling every moment of the 200-plus miles.

And as for Mazda’s very own ’85 RX-7? It easily conquered Touge California, with Mazda employees and other guests sharing in the miles throughout the day. For the record, it now sits with just over 1,400 miles on the odometer.