“For something to touch people’s hearts, it first has to have that same sort of ‘Wow! We made something really good!’ reaction for us, too,” said Masanori Minamisawa, the lead designer of the Mazda MX-5 Miata RF.

When he and the MX-5 RF team set out to design the vehicle, they sought to create a car that would not only compete with the most beautiful sports cars in the world, but one that would blow away the competition. As the lead designer for the new vehicle, Minamisawa had his work cut out for him; designing the newest version of one of the world’s best-selling sports cars was no small task.

“That’s what we work for. That’s the true spirit of how we make things,” Minamisawa said. “ A large goal for us when making the MX-5 RF was to create something infused with an eternal beauty that couldn’t be forgotten. We wanted to make something that really fits the image of a modern-day sports car.”

It was challenging work, but the team was up for it. Minamisawa said that others had told his team that not just redesigning, but rather redefining Mazda’s flagship roadster, couldn’t be done. Yet, everyone involved in the project worked tirelessly to create a sports car that was visually striking and a huge departure from anything that had been done before, yet true to its 30-year heritage. He said that can-do attitude is what made the MX-5 RF possible.

From the beginning, Minamisawa’s boss encouraged the design team to think of the car as art, and Minamisawa took the advice to heart.

“What we really mean by putting heart into work is that every single individual, including designers and engineers involved, set goals and have a strong desire to achieve,” he said. “It’s totally okay to have a vague idea of what your goal is, and to just think, ‘I want to do it like this’ or ‘I want to make this sort of thing.’ It’s okay to dream big. There are many people that think that way in Mazda. Just so long as you absolutely, desperately want to achieve your set goal like that, it’s good.” 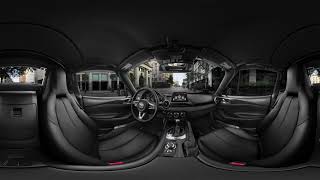 “For something to touch people’s hearts, it first has to have that same sort of ‘Wow! We made something really good!’ reaction for us, too,” said Masanori Minamisawa, the lead designer of the Mazda MX-5 Miata RF. When he and the MX-5 RF team set out to design the vehicle, they sought to create a car

Allowing the team to think big and pursue the concepts they were passionate about made the MX-5 RF a labor of love, rather than just work.

Minamisawa likes to compare the art of designing the MX-5 RF to the love he feels for one of his other passions—music.

“When I was creating the MX-5, I was seeing the car with a large amount of rhythm in mind. And within that rhythm, it’s finished with various details and harmonies,” Minamisawa said. “So I feel like it’s closely related to the feeling of making music, as the process for designing a car gradually starts to feel more and more real. What was really important was thinking about the moment where you get the unconscious reaction of just—‘Wow, that’s really good.’